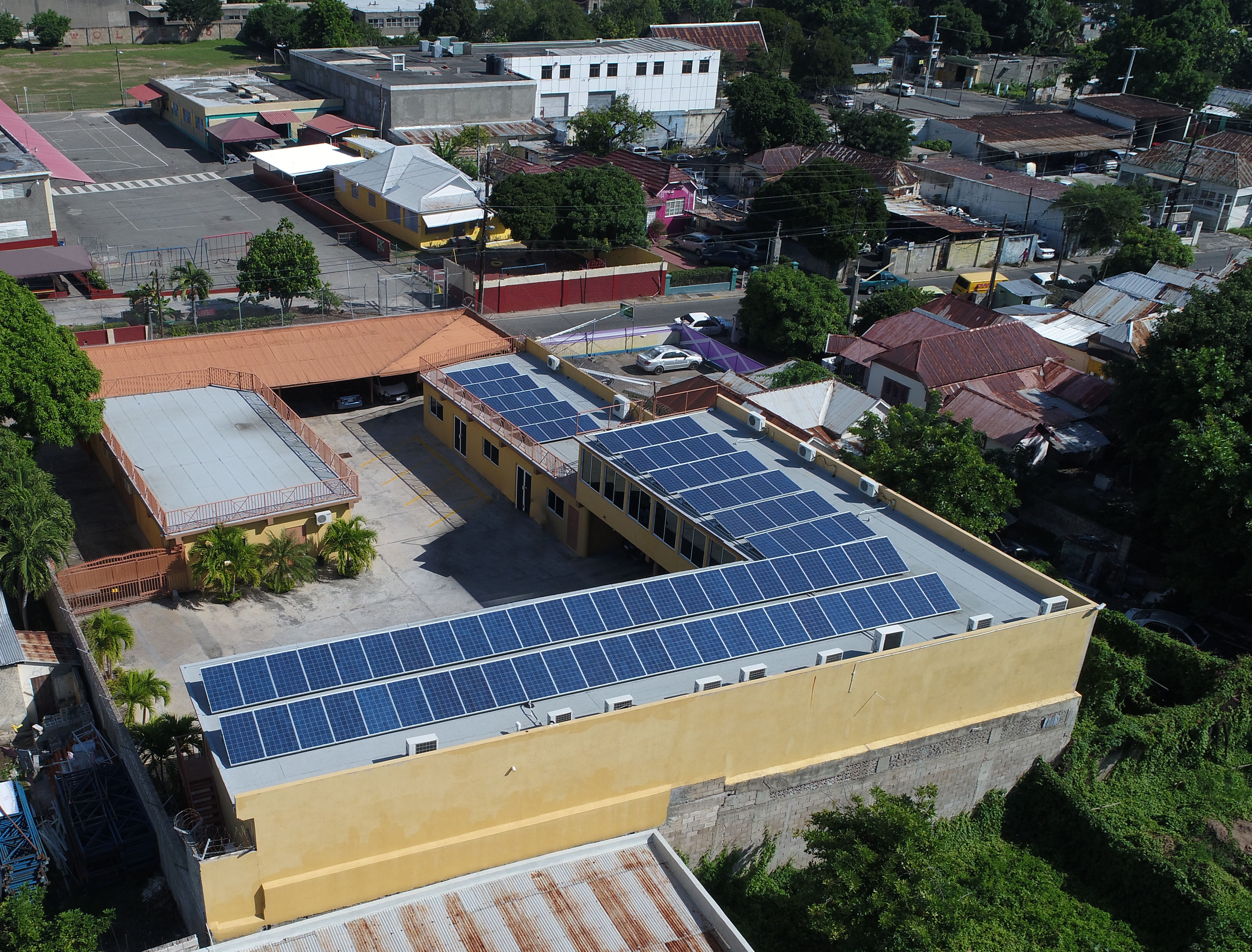 MANDEVILLE, JAMAICA – For homeowners and businesses alike, energy efficiency and cost savings require more than attention to switching lights on or off, or even buying energy efficient appliances.  Solar energy remains one of the most efficient long-term and environmentally responsible power options available. With costs more affordable now than ever before, you may be considering installing solar power and what type of system to select.

The three basic types of solar installations are Grid-Tied, Off-Grid, and Hybrid. Here’s a brief primer on each type to help you determine the best option for your location, along with a few pros and cons.

A grid-tied solar system is directly connected to your power company’s electrical grid.  The electricity generated by the photovoltaic (PV) panels is sent through a grid-tied inverter, which converts it to AC power that is compatible with the grid.

Grid-tied solar is generally the most affordable solution as the PV panels, inverter, and mounting infrastructures are the primary components required to complete the system.

In addition, since electricity is still pulled from the grid the exact same way it always has been, grid-tied solar is the most stable and efficient usage of solar panels. Instead of storing the power in batteries that degrade over time, you’re helping power your entire neighborhood in real time, decreasing how much energy you lose in storage.

One major downside to grid-tied systems is you’re still at the mercy of the power company’s maintenance capacity. When the company experiences a blackout, a grid-tied solar system is also taken off-line.

Off-grid solar systems can run independent from the electric grid. In order to accomplish this, they require additional hardware.

Power generated by the PV panels is fed into a charge controller, which regulates the charge instead of the power company’s grid. It is then channeled and stored in a battery. The charge controller determines the mode i.e.: Absorption, Float or Bulk Charge. This extends the lifespan of the battery by preventing overload of the battery bank based on the battery charge level. Note that engineers and installers have the option to manually select the mode during installation or troubleshooting of the PV plants.

Your home or other building connects to the battery bank through a power inverter, which converts the power from the batteries (Direct Current [DC]) to the (Alternating Current [AC]) 110/220V power utilized by most outlets.

This extra equipment makes off-grid solar installations more expensive that grid-tied ones. However, off-grid solar is ideal for remote places or underdeveloped areas where the electrical grid isn’t stable. It’s also a great solution for people who can afford the upfront costs and wish to untether themselves from the electric grid completely.

An off-grid solar setup quite often generates a surplus of energy. Consequently, much of the solar electricity produced is wasted compared with grid-tied systems which distributes the surplus to the substation.

With an off-grid system, it’s important to have enough battery capacity to store excess energy, and it’s recommended to also have a backup gas generator in case of emergencies.

To get the best of both worlds, a great option is the hybrid solar setup in which the solar battery is used as a backup should the grid fail.

As it’s being used as a backup rather than linked continuously, the battery discharges less frequently, extending its life. This means the battery needs to be replaced less often, and saves you the cost of purchasing a backup generator.

Keep in mind that the battery bank isn’t charged during a power outage. Grid-tied solar panels are designed to stop producing electricity during an outage (Anti-Islanding) in order to protect the electrical workers from working on live power lines. This means the same battery capacity is still necessary as with an off-grid system.

For those who want peace of mind and don’t mind the extra expense, it’s an ideal solution that ensures you have backup power in the event the grid stops working.

Still need help deciding?  Isratech Energy Solutions has provided affordable and dependable energy systems for decades.  IES works in partnership with our clients to reduce their ecological footprint by providing a wide range of renewable energy options including cost-efficient solar systems, windmills and bio-gas. Give us a call at (876) 279-8411, or email us at info@isratech.com