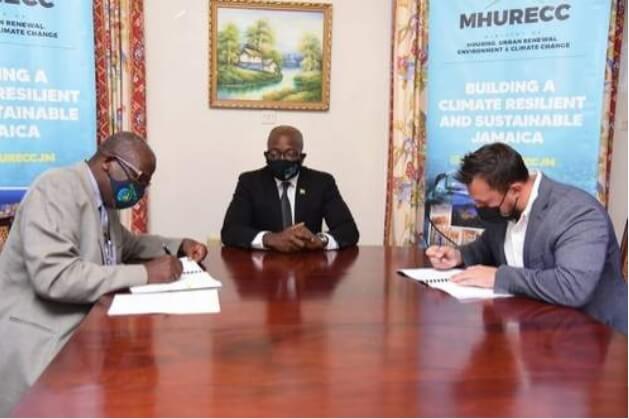 Approximately 100 farmers are expected to benefit directly and another 5,000 indirectly from training to be provided through five Farmer Field-Schools being established in the Upper Rio Minho Watershed area of Clarendon.

Work to design and implement the schools is slated to begin in June, following the $21.7 million contract signing yesterday at that will see the seven-month project being executed by Isratech Jamaica Limited

The contract was signed by officials of the Ministry of Housing, Urban Renewal, Environment and Climate Change and Isratech during a ceremony at Jamaica House.

Under the contract, Isratech will be responsible for, among other things, liaising with the Rural Agricultural and Development Authority (RADA) to identify suitable farmers for training and farms to be utilised for demonstration purposes; conducting field reconnaissance to select the training sites and prepare a logistics plan; building support for incubation/workdays and capacity development for select groups; and conducting community sensitisation and awareness workshops.

The entity has over 35 years of experience in the agricultural sector, specialising in technologies such as drip irrigation, that maximise yields while conserving precious resources.

This, he added, with a view to changing behaviour, so as to achieve sustainable environmental and farming practices.

“The overarching aim is to empower the farmers by providing them with the necessary knowledge and skills which will build resilience to the impacts of climate-related hazards. The farmers will be trained to disseminate their knowledge to other famers in the communities [which is] aimed at improving farming practices,” he said.

Charles emphasised that the project is critical to the Upper Minho Watershed area, which has been categorised as severely degraded by the National Environment and Planning Agency (NEPA) over the years.

This categorisation, he indicated, has resulted from unsustainable farming and land use practices as well as the exploitation of minerals, which have had a deleterious impact on the environment in the area.

In his remarks, Permanent Secretary in the Ministry, Dr Alwin Hales pointed out that the project targets the Bull Head area, which is located within a forest reserve, and is home to approximately 40 mainly farming communities with an estimated population of nearly 70,000 people.

“The Farmer Field-Schools will, in no small measure, increase the ability of the targeted communities to improve their resilience to climate change impacts in terms of water and land management, as well as build institutional capacity and best practices,” he said.

Dr Hales noted that among the expected outcomes of the initiative are enhanced capacity to protect livelihoods and food security in the communities, and improved local capacity for sustainable management of natural resources and disaster risk reduction in the targeted areas.

For his part, Isratech’s Deputy Chief Executive Officer (CEO), Benjamin Hodara, said his company was grateful for “the opportunity to be a part of this noble initiative”.

He noted that empowering farmers by equipping them with the tools and knowledge of proper agronomic practices “is a strong step in the right direction” towards the important goal of building climate resilience in Jamaica.

“We are certain that the completion of the Farmer Field-School Programme… will lead to a great improvement in agricultural practices across the island for generations to come,” Hodara said.

RADA’s Senior Director for Technology, Training and Technical Information, Winston Shaw, said the initiative is important as the Government seeks to continue building farmers’ capacity and resilience against the ever-changing variabilities in climate.

The Farmer Field-Schools initiative falls under the Adaptation Programme and Financing Mechanism for the Pilot Programme for Climate Resilience (AP and FM-PPCR).

The programme was developed by the Government of Jamaica and the Inter-American Development Bank (IDB) as part of the country’s Strategic Programme for Climate Resilience with the overall goal of increasing Jamaica’s resilience to climate change.